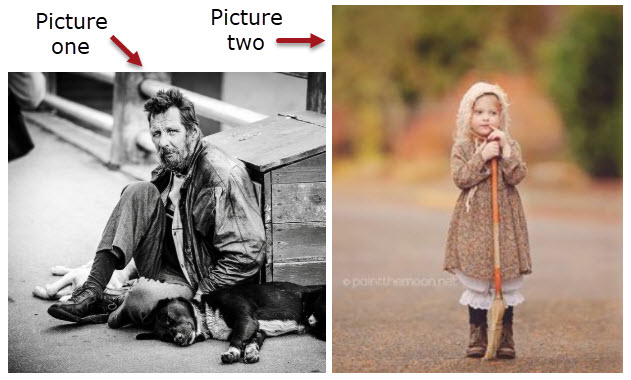 I am in a class called Creative Writing in school, and one of the assignments was to describe these pictures. So, I did! Here is what I wrote for picture 1 and picture 2…

Jonah’s twitchy eyes darted about the bustling streets, looking around to make sure no one would see what he was about to do. So quick he was sure no one saw him, Jonah dumped most of his coins and cash into the plastic bag hidden inside the box behind him. After he finished this dirty deed, Jonah kept going.

He searched for his next target. Joey, that man over there? He’s our target. The loyal dog quickly lay down and began to whimper. Jonah pretended to be caring for the dog, fussing around him and faking the dog’s sickness. To Jonah’s relief, the man stopped and looked down at Jonah. “Oh, please, my dog is sick! I need to take him to the vet. Will you donate to save a poor old dog’s life?” Jonah pleaded. The man looked down at Joey, whimpering and twitching on the floor.

“Oh, please, you faker. This dog is well- fed and perfectly healthy!” The man said. Jonah immediately stopped the rather convincing show he was putting on and sat up straight. The old man’s dog, named Joey, seemed to notice that the target had not fallen for the trick, and stopped his show, too.

“How did you know?” Jonah asked tentatively.

“Ha! I’m a veterinarian. This loyal pup seems perfectly healthy, just like you. I’m sure you’re making good money off your shenanigans. How much do you have in that cup there, boyo?” The man sneered.

“Well- um, I only have a bit…” Jonah said, returning once again to his ‘poor old man’ charade.

“Ha! I know your tricks.” The man swiftly lifted the lid off of the box behind Jonah, revealing the bag full of spare change and bills. Joey barked twice and growled at the man. Jonah yelped and quickly closed the lid. “Well, good day sir.” Jonah growled. He stared down the man as he walked away. We almost got our cover blown! That can’t happen again, Joey. Okay? Joey agreed, and they kept going.

She knew she was small, but she knew she was mighty. Sarah was only four, but with the maturity of a 12-year-old. After being sent out of the house to sweep the driveway, Sarah wanted revenge. What could she do? Sneak into the house and put wet paint inside Daddy’s hat? Replace Mommy’s lotion with toothpaste? Teach Parry the parrot some cuss words, and surprise Tommy? So many possibilities! But a voice from inside broke her train of thought.

“Sarah! Sweetie, YOU’RE SUPPOSED TO BE SWEEPING! Tommy’s friends will be coming over any minute, and the house needs to be spotless!” Sarah’s mother shouted from the window. This remark from her mom just fueled Sarah’s anger. Switching the lotion with toothpaste and toothpaste with lotion was a great idea! Sarah would just have to sweep the driveway quickly… how could she do that? Using the broom would take too long. Maybe if…

Five minutes later, Sarah had assembled a long, thick paper tube, some strong tape, a powerful fan, and two extension cords in front of her. She taped the paper tube to the fan, and plugged the fan into the two extension cords, which were plugged into the wall. The contraption was placed at the top of the driveway. Sarah turned the fan onto level four, the highest level, and on rotate. As the fan turned, it blew the leaves and dirt into the grass around the driveway. Done! Now, to cause some mischief…